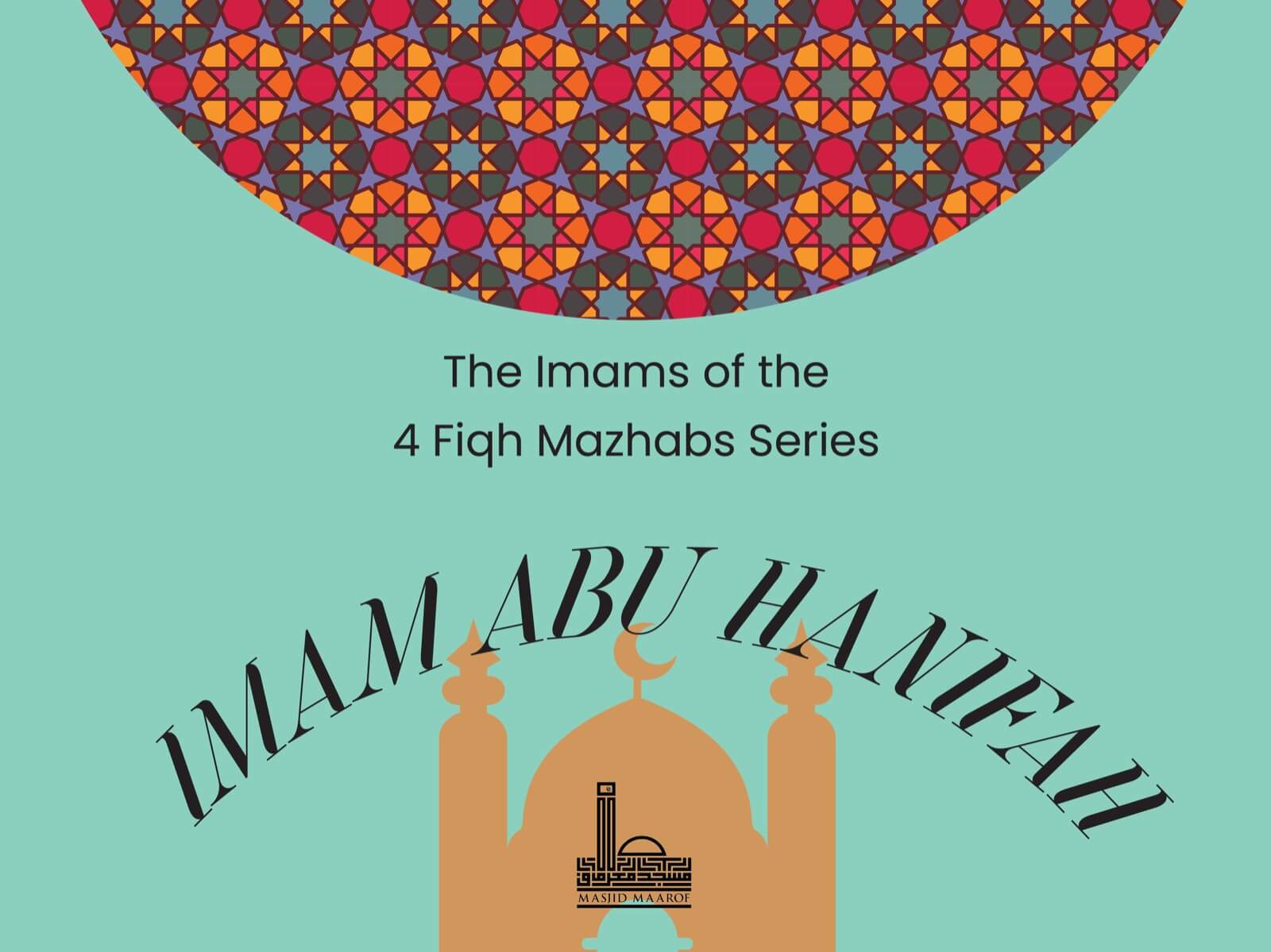 Abu Hanifah’s birthname is An-Nu’man ibn Thabit. He was born in Kufah, Iraq in 80 Hijri, and was of Persian descent. Having met several sahabahs, or companions of the Prophet (pbuh), he is considered as a Tabi’i.

In his earlier days, he was a merchant in the silk trade, and was known to be an honest person in business. He then delved into the Islamic disciplines, such as Hadith and Fiqh, before beginning to show huge interest in Fiqh.

His Teachers and Usul Mazhab

His methodology in Fiqh has been influenced by one of the greatest Iraqi faqih, or Fiqh scholar, of his time, Hammad ibn Abi Sulaiman, a tabi’i whose methodology was widely based on ijtihad, the process of reasoning and identifying rulings of Shariah. Hammad learned Fiqh from ‘Alqamah ibn Qais, who in turn learned from Abdullah ibn Mas’ud, a prominent sahabah who is very well-known to have mastered Fiqh and Ijtihad.

Abu Hanifah’s methodologies include Fiqh Taqdiri, where they derive rulings for different situations from the rulings of a precedent issue with a common underlying cause. He would look at the ‘illah, or reason, for a ruling, and compile similar situations or issues. If they possess the same ‘illah, the same ruling is applicable.

The Hanafi mazhab derive rulings from these sources (in order): the Qur’an, then the Sunnah, then the statements of the sahabahs, the Ijma’ (consensus), then istihsan and lastly ‘Urf (customs).

In teaching, he would lay out issues to his students. He would then present his opinion on the issue, and would let his students discuss what they thought about it and what might lead to that opinion. They might not conclude with one definite answer. These differences in opinions are recorded by his students and continue to remain as such. Their opinions, which may differ from Abu Hanifah’s views, are also considered as those of the Hanafi school of thought, as they used the same methodologies as Abu Hanifah when concluding the rulings

Due to the nature of his teaching; discussion (problem-based learning) and critical thinking -, some of them would grow to become prominent scholars and mujtahids of the Hanafi mazhab, despite holding different views from Imam Abu Hanifah himself in certain matters of Fiqh. Amongst them are Abu Yusuf, Muhammad ibn al-Hasan and Zufar ibn al-Hadhil. Their opinions are also considered as those of the Hanafi mazhab, as they used similar methodologies as Abu Hanifah when deriving the rulings.

When Imam Abu Hanifah was in his prime years, writing religious texts other than the Qur’an was still not the norm, as Muslims were worried if transcripts may get mixed up. It was only in his later years did writing became widespread. Hence, he did not leave behind any books to display his opinions in jurisprudence issues and his methodologies in extracting rulings. His opinions in Fiqh were mostly narrated through his students’ writings, such as Abu Yusuf, and Muhammad ibn Al-Hasan, and are usually combined with their own opinions. There is only one Musnad dedicated to him, a compilation of hadiths that were narrated by Abu Hanifah, written by his student, Muhammad ibn al-Hasan. In total, his musnad contained roughly 500 separate hadiths.

During his later years, he was offered the role of a Qadi, or a legislator. Being reluctant to take up the post, he was imprisoned, during which he passed away in 150 Hijri.